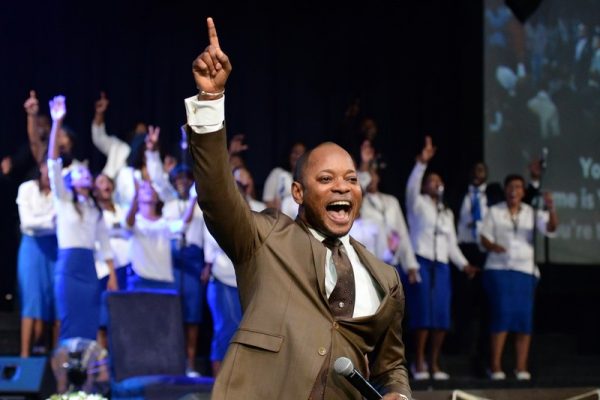 The first session of the Event hosted by Perfecting Church International South Africa (PCI) at Rhema Church in Randburg on Friday 15th April 2015 was prophetic indeed. The session commenced at exactly 10;00am after Pastor Allistair Halters who was also the Master of Ceremonies opened the event with a prayer then the Choir from Alleluia Ministries dressed in Blue and White led God’s people through the gates and into the Courts with Thanksgiving and Praise. As the choir ministered an array of songs from Local to International Praise and Worship the crowd moved and swayed in unison and in adoration of the Almighty, His manifest presence was tangible in the Sanctuary. After the Praise and Worship the very talented Hlengiwe Ntombela of Joyous Celebration amongst other accolades took to the stage and blessed the people of God with her ministration.

Shortly after the man of God Pastor Alph N Lukau, founder and General overseer of Alleluia Ministries International was

introduced. Pastor Alph as affectionately called by his congregants is a coach, mentor and spiritual father to many and also amongst many titles an astute businessman. He is married to his lovely wife First Lady Celeste Lukau who he introduced as still his girlfriend to everyone’s delight. As he came on stage a guard was on tow behind him fully adorned in an all-white navy seal uniform indicating a general in the Kingdom was about to deliver a message from God.

The man of God’s first statement was that if you remove Spirituality and the essence of God in Church, then the Church is just an NGO, and if you remove the Supernatural from the Church then it is just an empty house. “Everything about God is supernatural’ the man of God said. He instructed the people of God to say out loud ‘I will encounter God like never before’ and indeed that is what transpired. He led the attendees to raise their right hand and say a silent prayer for themselves saying “Lord Jesus do not pass me by”. By the leading of the Holy Spirit the man of God passed by a lady from Mpumalanga seated in the front row, he called saying, he heard a name Simeya, which the lady confirmed was her surname. He went on to tell her that she has been unable to marry because the spiritual husband she sleeps with every night is tormenting her and she confirmed this, he then mentioned the name of her son, and that he sees her amongst children to whom she confirmed the name was indeed her son’s name and she was a teacher by profession. To God be the Glory, Pastor Alph then prayed for the lady and said the Lord had His eyes upon her.

Pastor Alph went on to caution the body of Christ from being too acquainted with the devil and forgetting about God’s miracles. He declared that people were by virtue of being at the event at the pool of Restoration and God was set to deliver them. By the leading of the Holy Spirit he then called out a couple and as he mentioned that their blessing is linked to their union he called out the precise name of the lady and their son and mentioned the exact date of their wedding day. He prayed for them and reassured them that God really loves them and that those who take to God are radiant. Pastor Alph then walked to the rear of the Church and called out a man whom he said the Holy Spirit had told him he had come over the border and had struggled to get to the event but that had not deterred him from getting to the event. The man confirmed that he was from Botswana and because of transport issues he had hiked all the way from there to be at the event. As the man of God prayed for the man from Botswana he declared that all doors that had been shut for the man shall be opened by the 26th of December to which the man confirmed with glee that that was his birthday. As the man walked back to his seat congregants were giving him seed in his hand.

As Pastor Alph was drawing near to the end of the session he prayed for a woman plagued with Cancer who had come with her daughter and after saying that the Holy Spirit was telling him to pray for a tall big man from Botswana it happened to be the lady’s son in law and after which a word of prophecy came to a man suffering from kidney failure on a wheelchair who was brought in by an ambulance and after mentioning all the names of the man’s children and what they do for a living Pastor Alph asked everyone to stretch their hands towards the man and his wife and pray for him and suddenly the man stood up and walked.

Pastor Alph then closed the session by declaring that the God of Bishop H.F. Edwards and of Bishop Musa Sono is a good God and that people should believe this and stop acting like victims and that God gives out His grace sparingly, he said God says come and you shall receive because what man cannot do God can and with that he closed and prayed over everyone declaring that no one will be poor again, passed over opportunity repeatedly. What a blessing this session was, God Bless you Sir and your Ministry.

Update Personal Details
Your ticket for